Epic Canadiana is finally out!

You could be excused if the name didn't ring a bell.  I first posted about it in May of 2012 at which time it was known as All-Canadian comics.  In February of this year, the anthology's publisher, Cloudscape Comics, sent out a call for character submissions for what was then called Canadiana Comics.

That was the last I heard of this project until Friday night when I stumbled on the online launch announcement event on Facebook.  The Epic Canadiana anthology became available for download on the Cloudscape online store that night. 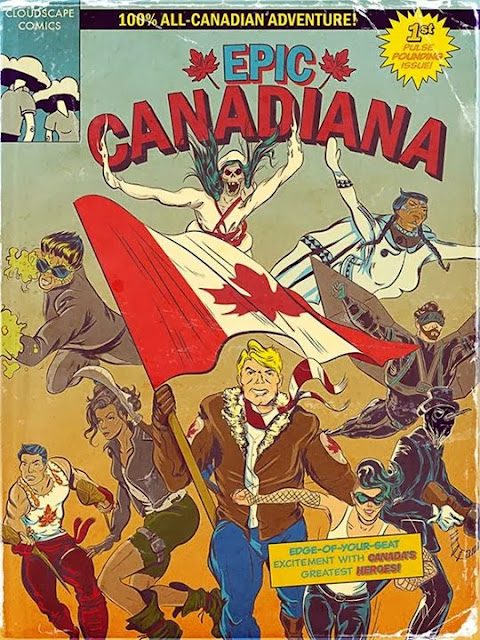 This thing weighs in at about 170 pages for all of $3.  It is not available in print format, at least for the moment.

As you may have determined by now, that's Johnny Canuck waiving the leaf.  He is featured in the first and last stories in this book.  Since the story takes place in present, this is apparently the original Johnny, making him 90-something years old.  He is a recluse, but being recruited to serve as a uniting symbol for the superpowered individuals who are suddenly emerging onto the scene.

Most of Johnny's "face time" is spent reviewing his history and detailing what his mission is expected to be but he does not see action as such.  The "words from the editor" at the beginning of the book pretty well state point blank that there are plans for future volumes, but you would get that sense from the book's contents anyway.

As far as the other stories in the anthology are concerned, there's a good blend of reimagined / updated versions of other World War Two characters and new creations.  Now that we've been formally introduced, I'm curious to see whether they will actually form a team, or if future stories will be based on Canuck's influence on the individual characters.  It sounds like the former, but they could play it both ways. Either way, I look forward to more volumes of Epic Canadiana (hopefully in print as well as digital).
Posted by TSOG at 11:52 PM