It seems that Captain Canuck is not the only Canadian character getting the animated treatment. The following was included in an Arcana Comics newsletter recently:


We heard your title with Jay Odjick, Kagagi, is being made into an animated television series. Congratulations! Can you give us more details about the series and when can we expect to find it on television?

Kagagi is the first First Nation superhero and is being produced by Sean Patrick O’Reilly and Jay Odjick for thirteen episodes of an animated television series. The cultural history infused in the story is enriching, unique, and educational, providing audiences with three dimensional, relatable characters, and an overall entertaining product. APTN is the Canadian broadcaster, and the first episode will debut on TV in January 2014.

Sweet!  Here's Arcana's Kagagi page from which you're able to buy the book in print or digital form.

There was also a website built around the book.  There's been little activity on it of late, but it still displays some preview and pin-up art.  The image below, however, is one I lifted from a message board (and which makes a nice wallpaper, I might add...). 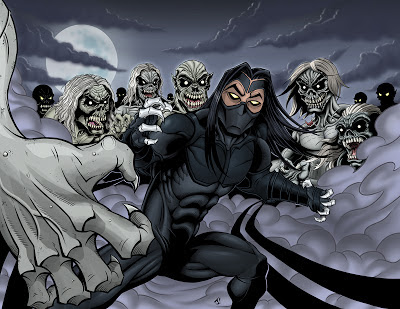