The "F" is for French-Canadian!

Several months ago, I bought the first issue of a book called The Almighties.  Why?  Because (Canadian) artist Mike Gagnon told people to on Twitter.  So I did.

See?  Marketing IS easy!  Gagnon contributed to the script and colours on the book.

So what was I getting into? 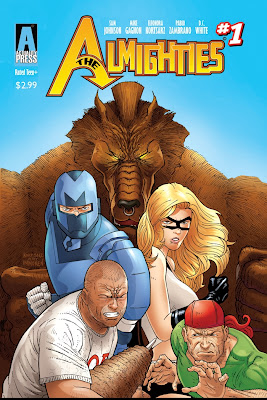 What if the greatest heroes on Earth were teamed up to take on the world’s biggest threats?

Or at least whoever was available was thrown together to deal with some shizzle?

In their Avengers-parodying debut, the mysterious WHITE OUT has brought together a dysfunctional bunch of heroes - MAXI-TRON, MS. F, MASON, NITE FANG and...STEFANOS - to take down ‘threats to America’ - sending them on missions that have comedic nods to all the big Marvel events of recent years, from Civil War to Secret Invasion, SIEGE to Fear Itself!

Action! Adventure! Comedy! Werewolves! Testicular Cancer! Playaz! Nazi Robots! And much more await you in the awesome pages of The Almighties!

Fun read, but at first glance it didn't appear as though there was a Canadian character on the team, so I didn't mention it.

But I stand corrected!  Or at least better-informed!

I recently found out about a free book called Almighties Origins.  I downloaded it and was rewarded with the following panel: 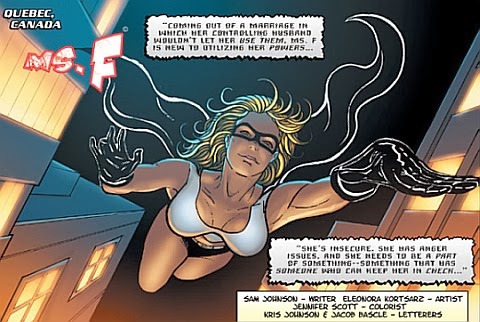 So while it was not mentioned in the first issue, Ms F. is indeed Canadian.  In the part of the book that is  dedicated to her, she visits another Canadian character, a guy named The Kruncher who has confidence issues following a devastating defeat.  The story continues on writer Sam Johnson's blog, the banner for which makes it quite clear that Ms F. is Canadian.  I wish I'd have come across it after reading issue #1.

You can show your support and keep up to date on the team's progress on the Almighties Amass! Facebook page.
Posted by TSOG at 3:13 PM